Tootsie had the good fortune to find her forever home in late June.  Jane and Jerry from Cheyenne made a special trip down to meet Tootsie at our rescue booth at the Fort Collins Fire Hydrant 5k … it was love at first sight!!  Ten days later, she was on her way to Cheyenne.  I have no doubt that Tootsie is loving her new home and being a part of a family.  Whether she’s ever had that in the past, we’ll never know … but it is certainly her life now.  She’s settled in and is doing quite well … and probably getting a bit spoiled, if the truth be known  lol.

You’ll note the background in the photo is a change up from our usual “family photos.”  That’s because our house is down for the count for the time being.  We’re in the midst of a home update which included taking out all the carpet and putting in hardwood throughout the house.  Between the carpet’s age, all the dogs, and the pukin’ cat, it was either replace it or go to hard surface.  We chose hard surface and haven’t looked back … most likely because there isn’t anything to look back on.  To get to hardwood, we had to completely move everything off the main floor.  With the exception of what’s in the kitchen cabinets, literally everything is either in a box in the basement or sitting in the garage, covered with a sheet.  Even my “kitchen” is in the garage, making cooking a real challenge as it’s either microwave, grill or crockpot.  Today, all the sinks in the house come out as the new counters will be installed on Monday.  Alan keeps reminding me I should be thankful we at least have one functioning sink … in the garage.     :::sigh:::    Obviously, his morning routine to get ready for work doesn’t include a sink being handy!

Join us for the 21st annual Fire Hydrant 5, the county’s largest family- and canine-friendly 5K pledge walk/run of the season.

Prior to and following the walk/run, join in the fun of the Pet Expo featuring over 40 pet- and family-friendly booths, Fido photos, paw painting, and more!

Fire Hydrant 5 is looking to be bigger and better than ever this year! New this year is Paul and Kama’s Dog Show Mix-Up!  Enter your dog in a host of fun contests – both silly and serious – from best pet/person look-a-like, best pet trick, best doggie kiss, best singing duo and more!

Register as an individual or form a team! Your participation and the additional money you raise through pledges will help us care for the nearly 12,000 animals that come to Larimer Humane Society each year.

How Do I Register?

Registration is now open for the 21st Annual Fire Hydrant 5!  Visit our registration site to register online, or download the event brochure.

Team-Up!
Gather your friends, family and co-workers!  Special team pricing of $20/person is available for groups of six or more.  Teams do not have to stay together on the course—walker/runner combos are welcome!  Teams may register online or via the event brochure. If you are a team captain, you may invite team members through your online team website, or feel free to download the shortened registration form for hand-out to potential team members. All team members must complete a registration form.  For more information about team registration, email our development team today.

Cat Nap
Are you unable to participate on event day?  Register to Cat Nap!  Cat Nappers may register online or using the downloadable event brochure, and will enjoy all the benefits of an event-day participant including the ability to raise pledges and form and/or join an event team. Cat nappers will also receive the commemorative 21st Annual Fire Hydrant 5 t-shirt for their support!

Can I Bring My Dog?

Yes! Dogs are welcome at the event, but not required! Come alone or walk/run with your dog. All dogs participating in the walk/run must abide by the following guidelines:

Look for the prayer flags on our canopy!!  We’ll have our two fosters, Tootsie and Leo, in attendance and … just maybe … they’ll have the same success as Jackson did in 2009.  He found his new family at this event!

As my former rescue partner can attest, it never fails that rescue emergencies arise when we’re out of town or getting ready to leave town … my recent trip to San Antonio was no exception.  In day four of the trip, I get an email about an Apso mix in the Canon City shelter who needs to be transported to a rescue NOW or face euthanasia.  A flurry of emails and phone calls ensues; she’s being transported on Thursday to Denver for pick-up at 12:30 p.m.  Great.  My first day back at work and there’s no freakin’ way I can meet the transport at that time.  Recalling Kirby’s family said, “If there’s anything we can do …”, I make a call with fingers crossed.  Kay, ever so gracious, interrupts me pleading my case by saying, “We can go get her!”  Not only did they go get her, but they also set about to get her cleaned up with a bath upon their return home.  And then offered to foster her when it became readily apparent she was a very sweet girl.  What a blessing for both “Tootsie” and rescue!

Tootsie actually arrived with the name of “Stubbie” … she’s missing her left front paw.  Given what I know of anatomy and as confirmed by Doc Sherry, the missing paw is genetic in nature.  In any event, she gets around quite easily and even navigates the doggy door in the foster home.  After much discussion between two vets and two groomers, we’ve come to the conclusion she’s an Apso-Yorkie mix.  From her transfer paperwork and the various emails with the shelter in Canon City, it appears she was a transfer in from a shelter in New Mexico.  Quite the traveled little dog!

She underwent a spay about ten days ago and is healing up quite nicely.  We opted for the laser treatment on the incision — something new at the clinic — which was touted as promoting faster healing.  By all accounts, it is doing just that.  Anything that can help them heal faster is definitely worth the extra $15.

The day after her spay, we got an email saying that one of the other dogs on the transport had come down with parvo.  Definitely not someplace we want to go!  Although Tootsie had a parvo vacc at the shelter in April (probably her first ever in her short life), we scrambled and got her in for a quick booster per Doc Sherry’s recommendation.

Tootsie is a sweet little dog.  She is very much attached to her foster family and plays with the other dogs in the house.  A quick study, she’s picking up very quickly on the housetraining and sleeps the night through in her crate with nary a peep.  She would probably do best in a home with adults and one other dog.  If interested or would like more information on her, please contact me at:  ApsoRescue@aol.com. 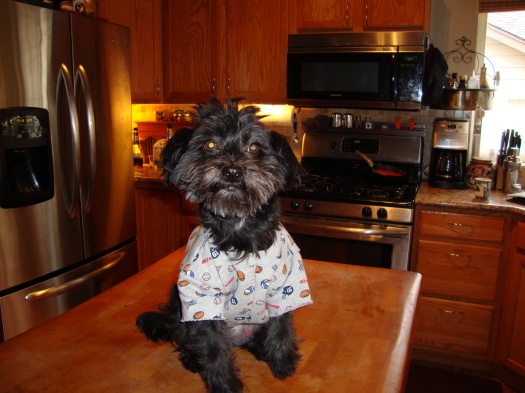 Tootsie is about as loving and low-key as they come … just a great little dog.  In a phone conversation with Kay, she mentioned that while one initially feels sorry for Tootsie and her obvious disability with the missing paw, one quickly realizes that she has known nothing else so her life is “normal” … she gets along just fine, thank you, and does everything that a dog with four paws can.

Our thanks to Kay and Dave for stepping up to the plate to help rescue when Tootsie desperately needed a ride to a new life.  Angels come in many forms …

… and trying  to get everyone up to speed.  Lots of things going on in the past month, including a trip to San Antonio to escort Pip to her new home and a major home renovation just getting underway.  I have a feeling that “caught up” will be elusive at best and a return to “normal” will be greatly wished for about day three of the hardwood install.  Never mind the paint and tile work afterwards.

I flew little Pip to her new home in Texas with Mazzi and Bella as well as meeting up with long-time Shuh Tzu cyberfriends.  Seven of us have been corresponding for years (some for over a decade) and we meet up whenever the opportunity presents itself.  This is the first time so many of us have gathered in one place and it was great to finally meet everyone.  Bella was ecstatic to see her little friend again and a good romp was the first order of business.

Just before I headed to Texas, Ruffy (n/k/a “Kirby”) went to his new home with David and Kay in Loveland.  He joins two other Apsos — Maggie and Max — and settled in quite nicely.  Long the queen of the house, Maggie decided Kirby is a little prince and allows him special privileges.  Like sitting on the back of the couch and watching out the same window.  And playing with her toys.  Life is good!!

To top it all off, we have a new rescue coming in this afternoon … Leo … a 3-year old male that doesn’t appreciate  the 3-year old human in the house.  More on him later as we get him vetted and settled into rescue.