After a year off the blog, it’s time to return.  Suffice it to say that a herniated cervical disc drastically limited after work computer time for most of 2014.  By a stroke of luck, acceptance in an FDA study for an artificial disc and a surgery in September finally stopped the chronic neck pain/arm numbness when nothing else worked.  So, here we are again.

Last year was slow for rescue with only one intake, Daisy.  Daisy came from a shelter in Aurora, Colorado via a family who quickly realized their lifestyle didn’t mesh with dog ownership.  Thankfully, they took the time to search out rescue to ensure she would be placed appropriately and find a good home.  A darling little thing at only eight pounds, she made up for her petite size with a big personality.  Daisy was placed with a family in Casper, WY who adopted Kersey from us many years ago.  Promptly named “Piper,” I have it on good authority that she’s spoiled rotten by Jan and Neal.

Christmas brought news of Lucy doing well in Westminster … Bubba n/k/a Max is living the good life … Murphy, our long-legged boy is enjoying life with his family.  Mary reported that we’d lost Kalsang to age … I know with certainty that the best years of his life were spent with Mary.  John, Neil and “the boys” are doing well in their new home in Oregon; Andy, our puppy mill survivor, has positively blossomed in their care.  As a foster home for rescue, their presence is greatly missed here in Colorado!  PippyDo and BellaToo were getting ready for a move to Covington, Louisiana to become real southern belles.  Judy advised that Magoo is doing remarkably well despite his blindness and advanced age.  Katu and Emmy are keeping Trudy amused with their antics.

On the show front, Teller completed his championship in August and went on to pick up Best of Opposite Sex in the Maturity classes at the American Lhasa Apso Club’s National Specialty in St. Louis this past October.  While there, we visited the Missouri Botanical Garden, the oldest botanic garden west of the Mississippi.  We could have spent the entire week wandering the grounds!  Teller is now retired from the ring, preferring to ride the couch rather than the show circuit.

Rescue is ramping up with an intake here very shortly.  Unfortunately, due to a death in the family and other circumstances, Sammy, our little black Tzu, is coming back into rescue.  And he’s bringing a friend with him … Budha, another little black Tzu!  Ideally, we’d like them to go together but are all too aware of the realities of placing a pair in the same home.  In any event, we’re off and running for 2015. 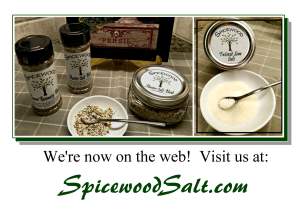 As if all that wasn’t enough, we recently launched our e-business, SpicewoodSalt.com.  Some of you know the product as “Little Lion Dog Master Salt Blend.”  With a new name, new logo, new packaging, two new products, a website and a Facebook page, we’re officially open for business!  As part of the global community, a portion of our proceeds will be donated to rescue.  Visit the Facebook page and say hello or just browse the website.