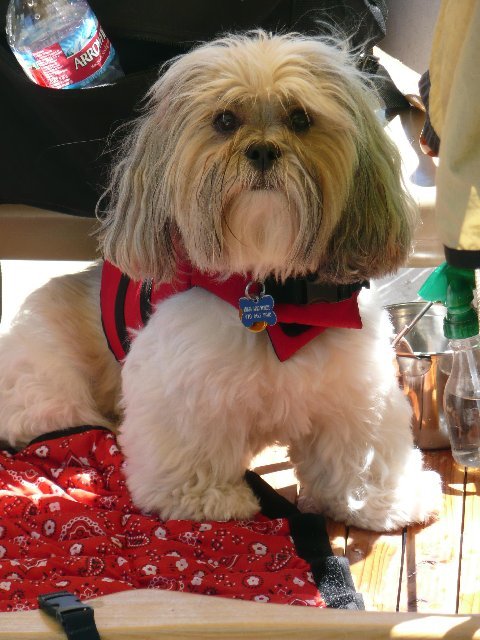 Ahhhh, summertime and the camp sites are calling!  We returned home Sunday evening from a four-day camping trip which included two days on the river in a canoe.  This year’s trip was taken with my adult niece and her family, as well as one of Alan’s co-worker’s and his family for a total of six adults, four children and one dog … Dante.  Our outdoor activities generally include the dogs whether it be camping, hiking, bicycling or canoeing (where *everyone* wears a life jacket).

So we’re sitting fireside the third morning in north central Nebraska on the Niobrara River at Smith Falls State Park.  So “north” that we’re literally ten miles from the South Dakota border.  The river is the highest it’s been in years due to recent rains … rains that have caused lush growth in this already verdant river valley.  Having lived in Texas for 10+ years, I’m phobic about fleas, ticks and chiggers.  Dante was dosed with Frontline days before we left town and there are at least three cans of bug spray along.

It’s a cold morning and all the adults are up, imbibing on the first pot of French-pressed coffee.  Dante is fussing in his ex-pen so “Dad” decides he needs a lap to sit on. A warm lap.  A warm lap and a belly rub … what more could a dog ask for on a cold morning??  Ever aware that we’re in tick country, Alan starts checking Dante for bugs as he’s belly up.  The ensuing conversation …

Alan:  Honey, I think you’d better come check this out.

Niece:   His belly is covered in them!

Alan:   How are we going to remove them?

Alan (indignantly):   Well, you can’t just leave them on him!!